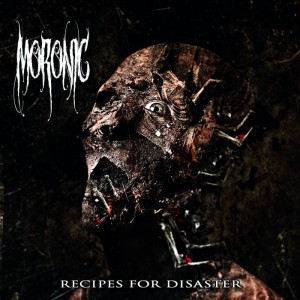 Out of Mannheim, Germany comes a band Moronic, founded in May 2014, by five musicians with previous experience. Before still fresh, actual full-length, they have released a 5 track EP in January 2016, entitled “First Strike – Demonstrations Of War and Outbursts”.

Judging by presented album atmosphere, German fellows are ready to offer their own vision, anger, views and suicidal/killing performing firework.

“Recipes For Disaster”, with 17 tracks in, introduce a band as an old school death act, with strong and evident grindcore, punk and doomy  presented elements as well.  A production work of its songs is also modern, and in the same time accepts a standards of our time.

Moronic  equal effort gives in growling vocalization rolas, as same as in performing demonstration, and they did it strong, dirty as hell, and in the same time convincible enough. It looks like that they are also more than interesting in concert form, so don’t hesitate to check’em. Their traces lead to deep underground, the best and only logical place for its career.