Guitarist-singer-songwriter Nicolette Aubourg was born to British/South African parents in Durban, South Africa where she studied music, performed at many venues and received a Bachelor of Arts in Psychology and English Literature before moving to Los Angeles. She has independently released three albums of original songs: “Wild Horse Running Free” (2016) produced by Jorgen Carlsson (Gov’t Mule) and Nicolette Aubourg, “Songs from Willow Glen” and “Grand View Drive”, as well as releasing two singles, “The Invitation” (lyrics by Oriah Mountain Dreamer) and “Madiba, dedication to Nelson Mandela”. 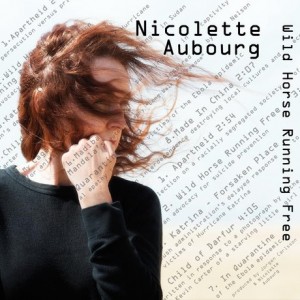 Her songs have received many awards, including two from the Billboard World Song Contest, and her music has been heard on radio and TV around the world. Nicolette’s music integrates acoustic finger-style guitar-playing with her vocals and vocal harmonies, and her recordings include cello, piano, violin, organ, percussion, bass and drums from some of Los Angeles’ most sought after musicians. With social commentary on subjects such as war, Apartheid, suicide prevention, the crisis in Darfur, the 9/11 terrorism, the out-sourcing of jobs, as well songs about animals, life in the Laurel Canyon Hollywood Hills, online dating, grief, and poems by Yeats and Shelley put to music, her lyrics are diverse and thought-provoking.

Nicolette performs her music at various venues in Los Angeles, has played at the South African music festival “Splashy Fen” several times, and performed her tribute to Nelson Mandela in Cape Town on the day of Mr. Mandela’s funeral. She is also an artist and uses her paintings in her CD liner notes and digital song representations. It is recommended that the listener acquire the physical CD’s of her albums to fully appreciate the artistic content of the liner notes.