Irish band Glyder began its musical journey in 2004 at the annual Phil Lynott tribute gig “Vibe for Philo” in Dublin. Three albums and two EP’s later Glyder have developed a very distinguishable and unique sound, blending their classic rock influences with a fresh and modern sound.

Over the past six years Glyder have toured the UK and Europe and opened for and shared bills with some of the finest names in rock, Metallica, Slash, Motley Crue, Thin Lizzy, Wishbone Ash, Dio, WASP, Thunder, Fish (Ex Marillion), Y&T, Michael Schenker, Hawkwind, Saxon, Gotthard, Blue Oyster Cult and The Answer. Glyder played their first headline tour in Spain in 2008 and headlined to 10,000 rock fans in India in October 2008 proving that they can win over any audience in any live situation.

Glyder released their third album “Yesterday, Today and Tomorrow” in 2010 on SPV. A&R Olly Hahn: “With Glyder we signed one of the finest rock bands from Ireland. They rock, they have catchy melodies and they play live their asses off. What more can you ask for!”

The original lineup of the band split in late 2010 and in January 2011 a new lineup was announced. The band are back with a new fire and a fourth album will be released through SPV in September 2011.

Glyder are a hard working band and have a loyal following from constant touring and consistent songwriting. They are a band not afraid to take on the challenge of the every changing music industry. Glyder are a band that will not compromise what they are about and refuse to follow trends like a lot of their contemporarys.
Make no mistake about it Glyder will be around in twenty years time carrying the Classic Rock torch for the future. 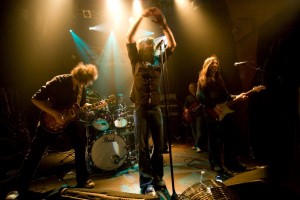