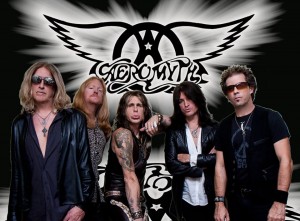 AEROSMITH. This one powerful name means so many different things to generations of fans around the world. 40 years and still going strong, they created the blue-print to survival in the crazy rock ‘n roll circus. With millions of albums sold and constant record breaking tours, they have earned their title of “The Greatest American rock n’ roll band”.
In 2002, 5 southern California musicians set out to become the best Aerosmith tribute on the market. Years later, a few personnel changes and a new name, the band has accomplished what they set out to do, become the World’s Greatest Aerosmith Tribute Band!
AEROMYTH has toured all over the USA including memorable events such as Summerfest in Milwaukee to 10,000 people, the last Jack FM “Arrowfest” concert at the Verizon Wireless Amphitheater in Irvine CA, the 95.5 KLOS Mark & Brian Poker Tournament. Also touring internationally including Honduras, The Dominican Republic, Puerto Rico, Monterrey Mexico at Festivals, Motorcycle Rally’s, Casinos, Corporate Events and more!
Aeromyth has been featured on the following television morning shows, Regis & Kelly on ABC 7, The Tonight Show with Jay Leno and a performance on Good Day, LA Channel 11 morning show. 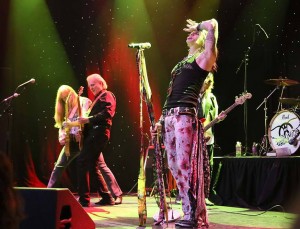 AEROMYTH has been a headlining act for 3 consecutive years on Fremont Street in Las Vegas, 2008 – 2010 with record attendance of 30,000 plus people each year. In 2009 Aeromyth took home the trophy for Best Tribute Band at the Vegas Rocks Magazine awards. In 2011 Aeromyth was featured on the front page of the Orange County Register after their performance at the OC Fair and that same year Gibson guitars website listed Aeromyth as one of the top 10 tribute bands.

During an Aeromyth performance at the Key Club in Hollywood, Dave Navarro was quoted as saying, “I thought I was hearing an Aerosmith Album!”

Performing all of their greatest hits, from classic songs such as “Walk This Way,” “Sweet Emotion,” and “Toys in The Attic,” to more current hits like “Dude Looks Like A Lady,” “Jaded” and “Don’t Wanna Miss A Thing”, an Aeromyth concert will take you back to your youth as well as entertain the masses who grew up with the band in the 80’s & ’90’s. 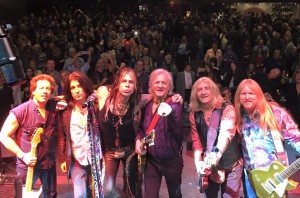 AEROMYTH consists of some very experienced and professional musicians with many years of studio and stage experience who collectively have the look and stage show making you believe you are at an Aeosmith concert. You can count on AEROMYTH to bring you the very best of Aerosmith!