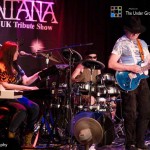 If you were not familiar with Carlos Santana’s music, here is one way to find out as UK tribute band ‘Soul of Santana’ perform his best-loved songs. From the early days of the debut album ‘Santana’, the follow-up Abraxas to the shiny, stadium rock of 90’s classics such as ‘Yaleo’, ‘Smooth’ and Maria Maria’ all receive a real good airing. It is class from the off. The arrangements are tight, instrumentation note perfect, and the excitement of Santana live is reproduced with nerve-tingling accuracy. This is the fruit of dedicated Santana fans that play their hearts out.

Repertoire: Expect to hear all the great Santana classics including, from the first album: Jingo and Evil Ways. As you’d expect, the band perform several songs from Abraxas. The album still considered by many to be Santana’s finest. Songs from Abraxas are: Black Magic Woman, Gypsy Queen and Oye Como Va (performed as a trilogy) and Hope You’re Feeling Better. Everyone will be familiar with the many hits that came form the Grammy award winning album ‘Supernatural’: ‘Smooth’, ‘Maria Maria’ and ‘(Da Le) Yaleo’ to name but three.