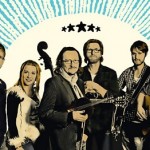 DBB are one of Europe’s most prodigious and respected bluegrass bands. They are well known and highhly regarded in both Europe and the USA, where they have toured several times. In DBB’s music you can hear the geographical and cultural similiarities between Appalachia, USA, the home of bluegrass, and its minning districts, and the minning and heavy industries of Bereslagen, Sweden, where the band originates. Bluegrass is predominantly working class music which has infected poor conditions in the countryside and minning villages. The music invokes the hard work in the mines and fields, the wide open spaces, the simply life, jealousy, prison guards, and the battle between GOD and the DEVIL. Downhill’s music reflects many of these themes. Music and lyrics expres life in the here and now, but with an awareness of tradition. On invitation, they performed more than once at the IBMA Awards in Nashville on account of their excellent playing skills and unique sound, as well as their songwritings abilities. As well as America, they have played festivals in most European countries. Most of the repertoire they perform is their own, and some of these songs have been recorded by both American and Europian artists. DBB was formed by Jonas and Kenneth Kjelligren with the intentions to play traditionally rooted bluegrass with a contemporary flair. Sharing the same musical ideas and sources for inspiration, they started to play together in 1998. Since then they have released four CD’s, the last one with only original material written by songwriter and mandolinist Jonas Kjellgren. The band members today are: Jonas Kjellgren on banjo, Magnus Sundstrom on guitar and vocals, Kajsa Westlin on bass and vocals, and Nicke Widen on dobro and Ivor Ottley on fiddle. Through the years Jonas Kjellgren and Kenneth Kjellgren have remained the corner stone of the band.