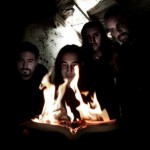 Turrigenous was formed in 2006. and have become well-known in the New York rock/metal scene for their musicianship and songwriting.

Their first EP “A Slight Amplification” was released in 2008 to critical acclaim. Turrigenous make dynamic metal, using the entire vocabulary of music to create a coherent sound. They incorporate everything from growling vocals to soft singing, widely varying guitar techniques, and thunderous drumming to mellow Latin grooves.

Now, they’ ve just pit out their first full-length CD “The Dream And The Resonance – Live”. Instead of just showcasing their abilities, the music is thematic and story-driven, making it more accessible than a lot of progressive rock and metal, In contrast to most live and studio albums, this was recorded in one take on one night, capturing the energy of true live performance.