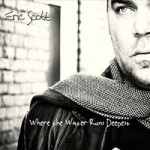 Washington, D.C. area musician Eric Scott has to date enjoyed a varied and interesting musical journey. As a touring bassist and vocalist, Scott has performed on numerous stages throughout Europe, Canada, the Caribbean Islands, Central America, and the entire United States. While building his reputation as one of the area’s most sought after sidemen & session players, Scott wrote and released three solo records, DIVINE STATIC (1999), LET’S HEAR IT FOR THE FOOLS (2002), and RED (2007), to critical acclaim.

The journey continues with Scott’s fourth release WHERE THE WATER RUNS DEEPEST (May 2012) on the Itzall Goode Music label (Indie). DEEPEST further explores the neo-soul, funk, and pop influences of RED…but Scott’s sound continues to evolve. It is no less confessional than RED…maybe even more so…and is even more personal and intimate with it’s stripped down production and arrangements. While the performances are first rate, this release is all about the songs and the voice; and they are wrapped in a sheerer, warmer, acoustic package.

Says Scott, “I’ve always wanted to make an acoustic record. Just guitar and voice. Songs seem to be so transparent when they’re recorded that way…very emotional, raw, and honest. That was my mind set when I started working on DEEPEST.”

With that vision in mind, sessions began on DEEPEST with co-producer Scott Smith. Some of the finest guitarists (Mike Stacey, Kajun Kelley, Sol Creech) that Washington, DC and Baltimore have to offer came on board. But…”after we started recording, I wanted to start adding more stuff…drums, bass, keys, ear candy. I couldn’t quite get used to hearing a whole set of songs with just my voice and guitars. I needed some grooves!” says Scott. Compromise was made, small drum kits and percussion were incorporated, and a record was born. “Scott Smith was constantly reminding me of the record we set out to make…very sparse, warm, and intimate. He reigned me in when I wanted to change directions and add things, and I’m glad he did. He really pushed me to be fearless vocally as well.”

The result is a record that sounds cohesive, focused, and balanced in it’s flow and presentation. Songs like “Boston” and “Get To Me” simmer and groove along nicely right alongside sparse acoustic numbers like “Victim” and”Everybody.” The ballad “Forgiven” further illustrates the deep, stark, and uncluttered tone of the record. Recorded with just piano and vocal, it details with painful clarity the ending of a relationship. As with his previous release RED, on DEEPEST Scott continues his willingness to bare his soul lyrically without compromise. Never has this been more evident than the track “Break Me Open.” Perhaps Scott’s most confessional and revealing tune to date. The song is a brutally honest foray into the opening of old wounds and facing the ghosts of ones past in order to heal. “It’s tough to reveal so much of yourself in a song,” says Scott, “but I’ve always been most drawn to songs where an artist is unafraid and just lays it out there.”

Not all is serious on DEEPEST, as evidenced by the playful, bluesy, tongue-in-cheek romp “Take Me Home” and the sassy, reggae-tinged “Mama Let Yo’ Hair Down!” Says Scott, “an acoustic record doesn’t have to be slow and somber. I tried to make a record that gets you thinking, tells you a little more about me, and when you listen you notice your toes are tapping and your head is bobbing.” DEEPEST promises to bring home what Eric’s listeners appreciate most about him – his unique and soulful voice, driving rhythms, and his poets view of the world with all it’s surprises, disappointments, thrills, and hope.

Eric Scott was born in Washington, DC and is a lifelong DC area resident. He has been a professional musician since 1994. Scott grew up listening to everything from Black Sabbath, Rush, AC/DC, The Ramones, and Motorhead to Marvin Gaye, Nat King Cole, The Dregs, ELO, Elton John, Hall and Oates, Joe Jackson, Elvis Costello, Wes Montgomery, and Dave Brubeck….and he still does. “Pantera might be in my CD player one day and The Carpenters the next.” he says. “I listen to everything.”

He loves the Washington Redskins, has a peanut butter and jelly sandwich nearly everyday, and owns almost 100 pairs of shoes.