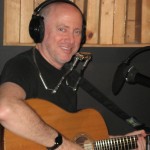 You won’ t be disappointed when you listen to the first solo album by New York City singer songwriter, David Gelman.

Hear the first two songs and you’ ll want to hear more. He play acoustic guitar and piano, and is accompanied by musicians on electric guitar, lap steel guitar, bass, drums and viola. You could call it rock / folk/country. Gelman studied music and worked briefly as a songwriter in earlier days, then took a couple decades off to make a living and have a son.

Now he is back writing songs. They are about universally shared experiences, with an open mind and the thrill of discovery, reflecting on where the road might lead.