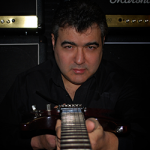 Bill Lubera is an avid composer/artist/guitarist from the USA and has been playing guitar since the age of 5. Bill currently writes instrumental progressive rock, has been a long time student of guitar master George Bellas, and has recently put out his 1st album “Global Warning”, which is comprised of 10 instrumental progressive and neo-classical progressive rock compositions feauturing complex time and modal changes, soaring lead solos and dramatic interludes based around weather events as the titles of the songs suggests. Using tke latest technology of sampler instruments and Logic Pro software Bill has combined his first class guitar playing along with his compositional skills to create an album that is multi layered in sound and mood, and will keep the listener engaged from start to finish. The album was produced mixed and mastered by George Bellas. Bill Lubera is no stranger to the live band scene.He was lead guitarist for “Jinx”, which was sucessfull Chicago, IL (USA) band in the 80′s and ” RipChord” in the 90′s.Bill owns his own publishing company as well ” Luberasongs” and has had written a song (1000 Years) for “Prisoner” (Cincinnati, OH band) which was released on their debut album “Young and Rejected”, back in the 80′s and has appeared on Michael Riser’s album “Rise”. Since hooking up with George Bellas in 2002, Bill has devoted his time to learning advanced guitar and compositional concepts and has culminated all this knowledge and expertise imparted to him by Mr. Bellas to create his first of many instrumental guitar albums