Singer/songwriter Andy Michaels has been here for a while, active with his career, whose albums took attention of worldwide critics and not only homeland listeners. 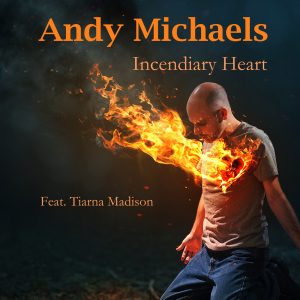 I have received from him personally, latest two releases – “Revisited” from 2017 year, and actual album “Incendiary Heart” from 2019.
As an author Andy writes melodic, sincere and insightful songs with powerful melodies, also with evident 70’s and 80’s touch. “Incendiary Heart” with 14 track in, delivers contemporary pop songs, with strong arrangements realizations, also with modern expressions and accepting standards of our time.
Tiarna Madison, Kerry Ironside, Carolyn Thomas and Sharon Court has taken an important rola in songs of the actual album. Mentioned presented songs are listenable, even that most of them are different in stylish perception, of course if we speak about contemporary pop, as a sort of genre, near to Andy’s interesting music space.
It is also evident that Andy did enough effort, that every detail from every aspect comes to the right place.
“Incendiary Heart” consists of  different atmospheric mood and songs done in mid, rarely mid-up tempo. This is also album for serious followers, and fans of contemporary pop tendencies.