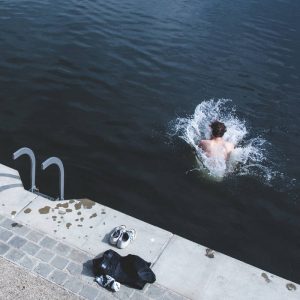 Out of Ghent, Belgium, comes an interesting quartet, consisting of 2 males and 2 females, gathered around key singer and pianist Jo Geboers. Their story started up in 2016 year, and in brief forthcoming period, a group has released an EP, entitled “Underspoken”.

“Out Of My Mind” is their actual full-length with 9 tracks in, released in February, this 2019.

Low Land Home aren’t a group for everyone’s taste and for every ear.  Their music is for intellectuals, whose interest sphere comes to inner psychological themes. Its music is original variant of indie pop, with dark elements, or better to say dark atmosphere, and mentioned ambient we can find on each of presented tracks from the album. They are melancholic, maybe in some aspects offering songs posses also depressive elements, but band choose to deliver that sort of specific own vision and attitude as well.

Songs from the  album are more acceptable for the night-time listening adventure, and if you reach to the materials of Belgium group, don’t hesitate to test its philosophy.