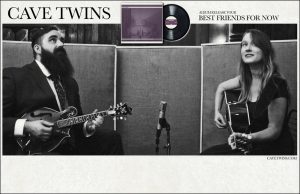 The Cave Twins is David Mayfield & Abby Rose. Identical twins separated at birth and reunited in song. David Mayfield, a Grammy & Emmy nominated artist grew up in a family band and has toured & recorded with groups like The Avett Brothers, Black Keys, & Mumford & Sons, and made numerous appearances on television including The Late Show with David Letterman & The Grand Ole Opry.

Abby grew up alone. With no one to hear her cries. She eventually turned those cries into “songs” and toured extensively with Northeast Ohio supergroup “The Speedbumps” until she found out that she had a long lost twin brother. However, it’s not their sordid pasts or even the chilling tale of their separation and journey to find each other that makes them special. No, it’s their unique blend of playing instruments and singing words that really sets them apart. Their music has been described as, “A nice mix of short cute little songs & shorter cuter littler songs”. Make a point to go see them in a cave near you!