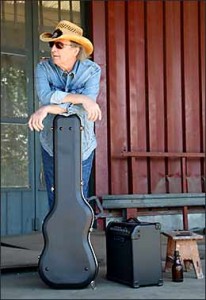 ”I was born in the rural outback of Bureå, Sweden, to hard working parents. My mother Siri worked with caring for the elders, and and my father Torsten worked the vast forests of Västerbotten.

The one who inspired me to take up music from the very beginning, was my grandfather on my mothers side, Kalle Markström. He played the guitar, the fiddle and sometimes he sang.

I think I must have been about 10 years old when I started to investigate grandpa’s beautiful Levin archtop guitar. Got my first own guitar a few years later and eventually started playing alongside a couple of friends and we formed a band, The Sailors.

I wrote my 1st song when I was 13, and after that there has been hundreds and hundreds more, some where I have written both music and lyrics, some are co-writes, and some just lyrics for the music of others. A couple of hundred has been recorded by artists and bands and has topped the Swedish charts.

Now, I have finally decided to release a few of my own songs on an album, this time under my own name, or rather, Lelle Dahlberg.

These words are true.”