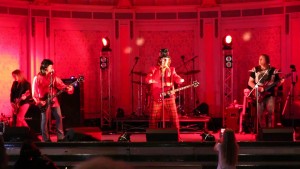 Since arriving on the tribute scene Slade UK have left fans open mouthed with the accuracy of their show. Once thought impossible, Slade UK recreate the experience of a real Slade show with all the power of the original band. Once seen, never forgotten. Relive a time when Noddy and the lads were the best live rock & roll band in the world.

Highlights so far – being chosen to open for the legendary Roy Wood of Wizzard on his 2013 Christmas tour, appearing on the main stage of Tribfest 2014, meeting Don Powell and finding out Mr Noddy Holder himself approves.

Even though there are 5 of us.