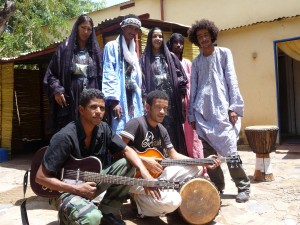 Ever since the release of their first album, ‘Adagh’, in 2009, they have been regarded as the spearhead of the new Tuareg generation; these legitimate heirs of Tinariwen have long been opening up new paths between desert blues and Western rock.

All around Kidal, the Malian desert stretches in every direction. Endless horizons of rock and sand, barren and parched. This is the southwestern edge of the Sahara, the home of the Tuareg people, and the town of Kidal is one of their main cultural centres. Fought over, conquered and re-conquered, it remains the symbol of Tuareg defiance and hope, the spiritual home of a dispossessed people.

It is also the town in which Tamikrest first came together as a group, and on Kidal, Tamikrest’s fourth studio album, the band pays homage to this place that’s nurtured them and their people.

It’s a cry of suffering and the yell of rebellion. It’s power and resistance. This is pure Tuareg rock’n’roll.

“I wrote most of the songs when I was in the desert,” explains singer and lead guitarist Ousmane Ag Mossa. But it had to be that way, he says. “If you want to talk about the situation, you really need to live it.”

From the simmering intensity behind the opener, “Mawarniha Tartit,” through the sweet slide work of second guitarist Paul Salvagnac on “Atwitas” to the full-blooded roar on “Adoutat Salilagh,” this is a band fired with passion for their people and the centuries of injustice they’ve endured.

“Kidal talks about dignity,” Ag Mossa says. “We consider the desert as an area of freedom to live in. But many people consider it as just a market to sell to multinational companies, and for me, that is a major threat to the survival of our nomadic people.” 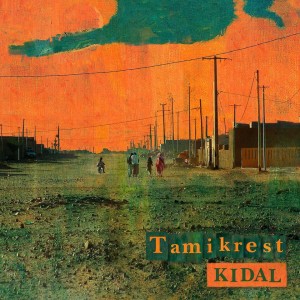 The music on the album has deep roots in the Tuareg tradition, but it burns with a brilliant, modern flame. “My love is my country, my ambition is freedom,” Ag Mossa sings on “War Tila Eridaran,” a proud statement of intent. “No being must live in oppression, ignominy, and eternal repression.” It’s the sound of a people who endure their struggle every single day. To them, the idea of what Kidal represents is almost as important as the place itself.