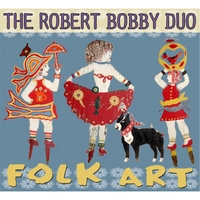 Robert Bobby has been a staple of the central Pennsylvania music scene since his days as front man for the critically acclaimed rock and rhythm’n’blues band The Speedboys, and has been favorably reviewed by music critics in Rolling Stone, The Village Voice, Sing Out!, and numerous other publications. He is known for his clever way with words, his quirky sense of humor, passionate voice and ability to connect with an audience. Musically, he is a pioneer in the unified theory of eclecticism.

Mrs Bobby is a riddle, wrapped in a mystery inside an enigma. She learned to play the bass around the time her AARP membership arrived in the mail, and is an inspiration to anyone who has ever wished they could learn to play a musical instrument. The York County native brings her vast knowledge of roots music to the mix and a joy that is evident in her performance. Above all, she’s mrs Bobby.

Together, The Robert Bobby Duo is a perfect blend of folk, singer-songwriter, americana and blues, witty, funny, fresh, yet familiar.