HAYLEY JANE AND THE PRIMATES (USA) 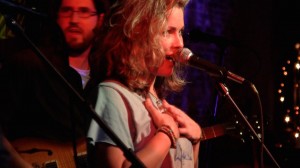 Hayley Jane and the Primates deliver a rich, genre-bending sound with a tantalizing live performance. Winners of the New England Music Awards’ Roots/Americana act of the year, The Primates have created a serious buzz in the music world. Their music draws inspiration from many styles including early rock and pop; old musical theater; folkadelic, bluegrass and country; along with blues, soul and reggae.

Their songs are praised by music lovers for successfully creating a diverse sound with clever, over-the-top lyrics and Vaudevillian style storytelling. Defying categorization, the band’s on-stage energy, skilled musicianship, theatrics, and group improvisation takes you over a landscape of emotion and leaves you wanting more.

The band’s first full-length album, Gasoline, engineered by Brian Wallace, was recorded during their first west coast tour and released in 2014. The tour kicked off at the iconic Whisky a Go Go and ended at Qualcomm Stadium for Monday Night Football.

Hayley Jane and the Primates released their first EP entitled Color Me, in the spring of 2012, which was described as “brilliant, brave, innocent, tangled and cutting edge…genius” -Scarlet’s Picks

They have graced the stage at The Calderwood Theater, and The Huntington Theater; and have performed multiple times at Boston’s Government Center along with the city’s “First Night” New Year’s Eve celebration. Hayley Jane and the Primates continue to find ways to bring old and new together to create a unique theatrical spectacle that is all their own.