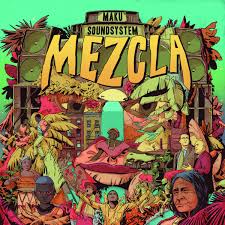 M.A.K.U Soundsystem is an immigrant band from New York City. With most of its members hailing from Colombia, M.A.K.U embodies an active quest for identity through sound and bodies in motion, and puts on a party for everyday people. Born in 2010 the band has independently released two full-length albums, one EP, and toured across the U.S. with their fiery grooves.

M.A.K.U’s distinctive sound is enriched with a variety of musical backgrounds brought to the table by each of its members. Although not inherently discernible there are hints of Colombian Folklore, Psychedelic-rock and Caribbean grooves. It all comes together through a D.I.Y. attitude of getting things done, from composing to releasing independent records; M.A.K.U is as much about the music as it is about a way of life. 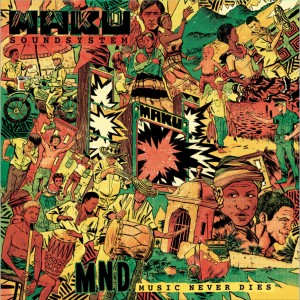 M.A.K.U released their first album at Lincoln Center Out-of-Doors’ La Casita in the summer of 2010. Vamos Bien is an experimental record made as the band explored different musical landscapes and collaborators. This album served as a stepping-stone for the formation of the band.

By 2011 the band consolidated its members and further developed its sound leading to the recording of their second record MAKUMBALA. This time the album was recorded directly to tape and with all musicians playing together, choosing the best out of three takes. MAKUMBALA was released at S.O.B’s as a limited 7-inch vinyl single, and a full-length digital download. The album art on this record was the result of collaboration with Brazilian street-artist Eder Muñiz, who took the ideas and concept developed by the band and turned them into a breathtaking mural. Photographs of the mural were adapted to fit the cover, providing the final touch to the band’s second musical work.

M.A.K.U’s third album M.N.D. (Music Never Dies) was released as a 12-inch vinyl EP at New York City’s Joe’s Pub in November of 2012. Through it the band illustrates its discovery and development of a shared musical language they like to refer to as “Immigrantbeat.” Recorded at Brooklyn’s The Bunker Studio in collaboration with Strange Weather, M.N.D. came together by choosing the best out of a few takes of the full band playing virtually in the same room, in an effort to capture the rambunctious energy of their live performances, and once again recording directly onto tape. The album art was developed in collaboration with members of a local New York band called The Peeps, and illustrates a combination of scenes described through the album’s lyrics with splashes of vibrant color and lively characters. This art was featured on Remezcla (an online Latin culture magazine) as one of the best 12 album covers of 2012. 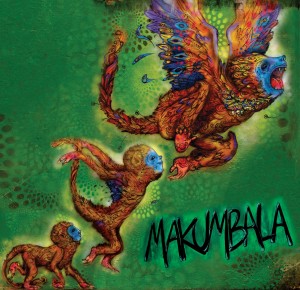 In August of 2013 M.A.K.U released the official music video for the song El Jugo from M.N.D. In a raw and simple way the video aims to illustrate the struggle found in following artistic dreams while working extra to make a living in the hustle of New York City. Directed and edited by Max Ocampo, this message quickly reached a wide audience thanks to multiple shares through social media and a variety of music blogs and online outlets both local and internationally.

M.A.K.U is currently tightening new grooves and sharpening their moves for the completely independent recording of their fourth album to date, to be released in 2014.

M.A.K.U has been the recipient of the globalFEST Touring Fund in 2012 and was nominated and selected as one of nine artist to join the 2014-15 New York State Presenters Network Touring Roster. They have been featured in such prominent media outlets as Afropop, WNYC, NY Daily News, Village Voice, TimeOut NY, Remezcla (NY, Los Angeles and Chicago), Periscope, Sounds and Colours.