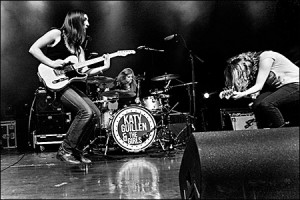 Katy Guillen & The Girls may have deep roots in the blues, thanks to leader Guillen’s considerable skills and long history as a blues guitarist, but this trio, Guillen (guitar, vocals), Claire Adams (bass, vocals), and Stephanie Williams (drums), brings a wide range of talents and tastes to the band’s sound. Guillen’s searing and lively licks, William’s heavy, driving drums, and Adams’s rock-solid bass create a dense sonic background for Guillen’s honest and powerful lyrics, delivered with soul and verve and complemented by Adams’s intense harmonies.

Guillen began participating in blues jams in the Kansas City area at age 14, and within a few years she was playing as a featured guest with local blues legends and seasoned veterans like John Paul’s Flying Circus, but she and The Girls don’t stop there. Their combined experiences playing in bands with genres ranging from baroque pop to appalachian acoustic folk to classic rock ‘n’ roll, as well as Guillen’s education in traditional flamenco guitar, have added depth to their musical vocabulary and allowed them to shape a sound all their own. Influences span from timeless guitar god Jimi Hendrix to sweet songstress Patty Griffin, with nods to contemporaries such as Heartless Bastards. KG&G are as known for packing blues-and-BBQ roadhouses, as well as they fill up a multi-bill alternative venue. 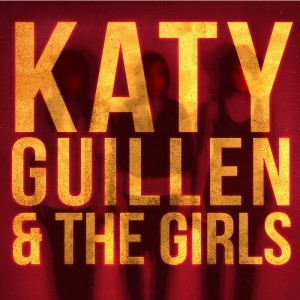 Proving that necessity is the mother of invention, Katy Guillen & The Girls formed in September of 2012 when seasoned guitarist Guillen found herself without her previous collaborator, Go-Go Ray (with whom she released LP “When I Get Away” in early 2012). She was offered an opportunity she simply couldn’t pass up, an opening slot for the Royal Southern Brotherhood at Kansas City’s legendary venue Knuckleheads, so Guillen recruited bassist Claire Adams and drummer Stephanie Williams to create a trio. Their chemistry onstage proved irresistible, and the band has been crafting their unique brand of bluesy roots-rock ever since. 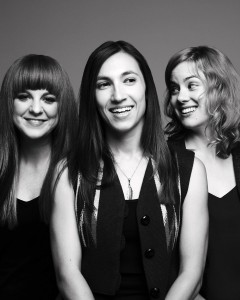 After nearly 3 years as a band, their success continues to build. The trio kicked off 2014 as finalists at the International Blues Challenge in Memphis, TN. Since then, they have played festivals in their native Kansas City, as well as fanning out to locales such as Des Moines, IA, Austin, TX, Daytona, FL, Las Vegas, NV, Denver, CO, and Santa Monica, CA. As backing band for singer-songwriter Jenny Wood, KG&G opened for rock legend Joan Jett. Not content to stay domestic, they accepted an invitation to play the prestigious 35th annual Montreal International Jazz Festival, toured Sweden in November 2014, and participated in Joe Bonamassa’s Keeping The Blues Alive at Sea Cruise in February 2015. They’ve maintained a busy tour schedule so far this year while working on material for their 2nd full-length release, slated for spring 2016. 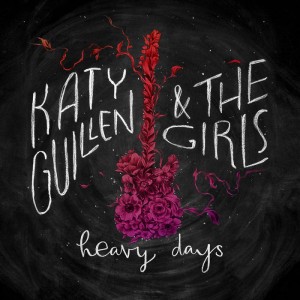 They released their first full-length album in early 2015. Katy Guillen & The Girls plan to continue writing, performing, and touring into 2016 and beyond. Their already sizable fan base grows with every stop they make, allowing them to spread their infectious and original mix of classic American genres from the heartland of Kansas City to music lovers around the world.