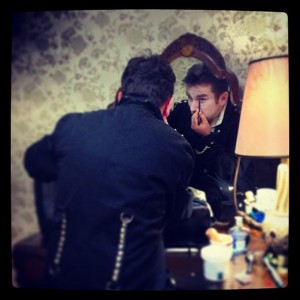 Formed as part of an experimental staging of Hamlet, Double Eyelid has spent the last six years developing its sound and challenging audiences along the way. Driving the band are the songs and energy of singer, occasional instrument-player and charismatic oddity Ian Revell. Adding guitar grit and production chops is Karl Mohr, and floating above the fray is keyboardist Benjamin Mueller-Heaslip.

Double Eyelid was formed in Toronto in 2009 by Ian Revell (vocalist, songwriter). While key influences include Bauhaus, David Bowie, Rozz Williams and the Sex Gang Children, the closest parallel is perhaps to early Roxy Music, with its tension between street level expression and high art. 2011 proved to be a “launch” year that included gigs with The Scarlet Fever, Corpusse and Adaptive Reaction.

The 3 core members (Ian Revell, Karl Mohr and Benjamin Mueller-Heaslip) met via the music department at Queen’s University (Kingston, Canada). The first time the 3 worked together musically was in 2003, performing as Karl Mohr and the Fallen Angels – Karl Mohr was the vocalist/songwriter for that project, which also was in the ‘goth’ vein – Karl has since renamed his project Dead Red Velvet. After trying different lineups and a couple of different drummers, Double Eyelid decided to work with a drum machine live and in the studio. Initially an arty post-punk project, the band shifted in more of a legitimate goth direction with the first single and video, “Dead is Better,” which were released in July of 2012. The video for “Dead is Better” was shot by up-and-coming horror filmmaker Steven Cerritos, and was featured by MuchMusic, Canada’s equivalent to MTV.

After multiple delays, the first album Seven Years was released in July of 2014, and almost instantly earned high acclaim from around the world. Mick Mercer hailed the album as a “classic” that was “easily one of the year’s best” while Terra Relicta Webzine ranked it #11 on their top 20 albums of 2014. 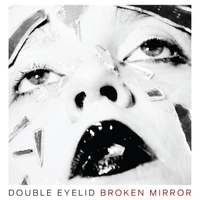 In the fall of 2014, Double Eyelid signed with DeadFall Management for UK and European booking and promotion. In February 2015, Double Eyelid were included on Oskar Terramortis’s 33 Goth Bands You Should Know compilation.

The band’s second video, for the song “Black Box,” is now in post-production and will be released on May 14. Directed by Japanese filmmaker Keishi Kondo, it has a surrealistic film noir feel reminiscent of David Lynch’s Eraserhead.

In the summer of 2015 a remix album will be released featuring remixes of tracks from Seven Years by artists in the goth and industrial scene from around the world. The band is currently booking a tour for the fall of 2015.