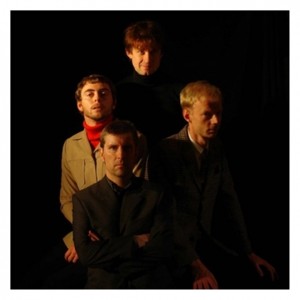 In the winter of 2011 The Men got what is usually referred to as a ”unique offer” in commercials. They were asked if they wanted to travel 9,911 miles across half the globe from Lund, Sweden to Melbourne, Australia to play in a music festival.

”We just shook our heads and realised that it was a completely stupid idea. Sure, we would be headlining the festival, but still — it was too long a journey and too short notice. And then we looked at each other again. Melbourne. When would we get a chance like that again? We had to say yes”.

The group’s singer and hyper-energetic maracas shaker Sven Köhler remembers the trip that made such strong impressions on him, bassist Ola Främby, guitarist Olof Wallberg and drummer Niklas Kilenstam, that it inspired the five first songs on The Men’s 4th album ”This Way”, “If Tomorrow Comes”, “St Kilda Beach”, “Looking For Swedish Men”, “Mr BBQ” and “My New Black Sailing Shoes”. 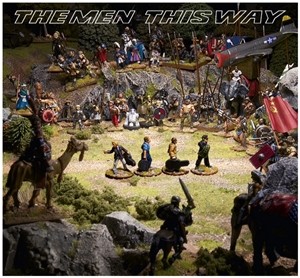 “Oh, no – not a concept album”, you might think. Have The Men followed 60’s icons The Who, The Kinks, The Small Faces and The Pretty Things down this risky path? Not really. The Australian theme songs merely work as a kick-off to what might be the best collection of songs in the hard-hitting rhythm and blues tinged power pop style that they’ve made their own.

Still there are differences that give ”This Way” a slightly different edge compared to its predecessors, ”The Men” (2002), ”Return” (2006) and ”Four Good Men And True” (2009). For starters, the band this time decided to record in producer Amir Aly’s Yla Studios in Malmö, while the two latest albums were done in producer Christoffer Lundquist’s famously retro equipped studio.

In Sweden, Aly is as famous for his modern pop 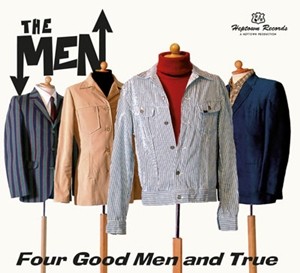 productions, as Lundquist is for his ability to capture the late 60’s sound. On paper it sounds like two different production schools, but in reality the difference isn’t that big. “The main goal this time was to push the sound as far as we possibly could. Everyone was to play loud, and everyone was to be heard the most”, is Ola Främby’s summary.

As a fan of The Men’s forerunners The Sinners and The Girls, Amir Aly enthusiastically started his work to create an “updated old school sound for 2013”. Production-wise the task was solved with a clever microphone placement in the studio in order to give each instrument it’s own characteristic sound. The idea was to use fewer microphones but position them in a way that would give the group a more modern and aggressive sound. The result has made Niklas Kilenstam’s already explosive drumming get even more in your face than before. Then Ola Främby’s mighty Gretsch bass was plugged into a Fender 75 guitar amp, which created a fat and slightly distorted bass sound. And when Aly finally panned Olof Wallberg’s ringing guitar power chords and Främby’s pumping bass into opposite stereo channels everyone realised that they had achieved their goal. It sounded like The Men, only more so. 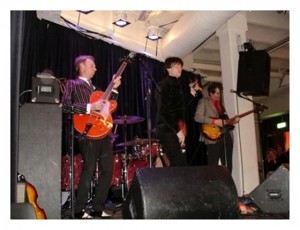 followed The Men since their formation in the early 00’s. But with ”This Way” it seems the band have escaped the anorak. So what’s the correct way of describing The Men’s music today? Ola Främby needs only three words. “Hard, but elegant”, he says. And when he describes the atmosphere in the song “Back To Square One” he comes even closer to what might be the essence of The Men’s music; “It sounds like England when it’s raining”.

But let’s get back to the album’s sunny start with its Melbourne-inspired songs. “Looking For Swedish Men” almost wrote itself when their Australian record label contact/concert promoter/fan Dave Stevens met them at the airport, holding up a sign with that message.

Dave is also the founder of the record store Pure Pop Records at St Kilda, the beach community that inspired another of the songs on “This Way”. Apart from the music festival gig the band also played in the record store, and hung around on the clubs and bars around St Kilda. With its relentless riff and honking sax, St Kilda Beach became the band’s tribute to the area’s laid-back and inviting atmosphere.

Even the lyrics have taken a step forward this time. Sven Köhler and Ola Främby write the group’s material together with The Men’s fifth member — manager, songwriter and creative spin doctor Joakim Kilenstam. ”It’s not just things we make up, it’s for real. We write about ourselves. To love and live your dreams, like keeping on playing rock ’n’ roll”, Sven says.

The songwriting trio Köhler/Främby/Kilenstam have slightly different roles in the creative process. Sven’s strength is the ability to easily find melodies and basic chord progressions. Ola not only churns out melodies in a near constant flow, he’s also the man with an ear for quirky arrangement ideas that help the songs stand out even more. Joakim is the non-musician with a head full of possible or impossible musical combinations, like: “How about playing it as if it were a soul number on ’Sweet FA’”.

One example that shows just how personal The Men’s songwriting can be these days is the duet “Don’t”, where dad and daughter — Sven and Isabella Köhler Alvén, that is — meet in a generational clash, so funny and direct that it’s hard not to be moved.

Of the album’s 13 songs all but two are around the magic three-minute mark. With its six and a half minutes, “My New Black Sailing Shoes” is the big exception. “We had a bunch of unfinished songs that we started with, but never really got around to finishing. So we put them all together into one song instead”. Now wait, where have we heard this one before? Wasn’t that album called “Abbey Road”?

And sure, we could go on and discuss song after song on ”This Way”. But then we wouldn’t have time to talk about the amazingly detailed cover with its tin miniature figures by the collector and miniature creator Pelle Persson. Take a closer look at the minimal proportions of The Men figures on the CD booklet’s last page, and then consider this dialogue when Pelle was about to paint Ola Främby’s boating blazer with its classic broad stripes.

Pelle: ”Hey, that thin red line between the blue and grey fields — does that really have to be there too?”

Ola: ”Well, it depends on how precise you want to be”.