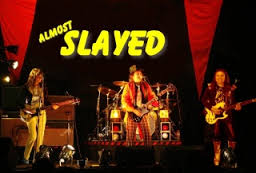 Almost Slayed take you back to the 70’s when Slade were the U.K’s no. 1 glam rock band. They have been reported as being the closest sound you will ever hear to the real Slade back then. Their authenticity and attention to detail give them the true sound and visual appearance of Slade. Their live youtube video clips are watched worldwide every day. Lead vocalist, Danny, was a high contender to be the new frontman for Slade in 2013, but he would have had to move to the U.K. and that was not a feasible option for him. As well as Perth, Almost Slayed have played in Brisbane, Queensland and in 2012 they supported The Sweet at The Regal Theatre, Perth when The Sweet toured Australia.