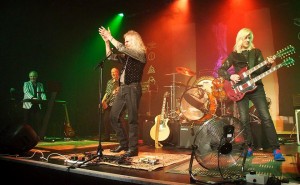 During 2012 Whole Lotta Led made significant changes to their line up and 2013 has seen them go from strength to strength with the band’s customary two and half hour shows receiving universal acclaim from Zeppelin fans the length and breadth of the UK.

Whole Lotta Led have always avoided using wigs and costumes, instead they focus on the music and the new five-piece line-up recreates the sounds of Led Zeppelin’s original studio albums to an astonishing level of accuracy.

For Whole Lotta Led it as all about celebrating the incredible music which Jimmy Page, Robert Plant, John Paul Jones and John Bonham created during their illustrious career.

All five members of Whole Lotta Led lived through the euphoric times of Led Zeppelin’s 1970’s heyday and all witnessed Led Zeppelin live, except for Martin who despite obtaining tickets to see them at Earl’s Court in 1975 couldn’t go as his mother wouldn’t let him – well he was only thirteen at the time!.

Since their formation in 1996 the band have continually led the field of Zep tributes and with over 1,300 shows to their name they have performed ‘Stairway To Heaven’ more than any other band in the world – INCLUDING Led Zeppelin.

Whole Lotta Led pioneered the concept of performing a complete album live when in 2001 they toured the UK celebrating the 30th anniversary of the release of Led Zeppelin’s classic fourth album. During their eighteen year career Whole Lotta Led have also performed Led Zeppelin I, Led Zeppelin II and Houses Of The Holy in their entirety. Since then numerous bands have followed this format.

Whole Lotta Led were also the first tribute act to recreate some of Led Zeppelin’s legendary live shows when in 2001 they performed the ‘Bath Festival’ set, in 2003 they staged the ‘Earl’s Court’ tour, in 2005 they recreated Zep’s last shows in England with the ‘Knebworth’ set, performed the live CD ‘How The West Was Won’ in 2006 and finally in 2008 they completed the ‘2007 O2 Reunion Show’ tour. 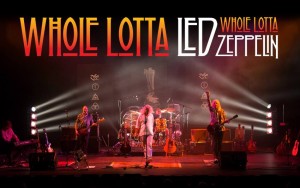 Each member has ‘paid their dues’ in numerous bands of many different styles throughout the years and have played and recorded with many well known names in the music business but now they have joined together to perform some of the greatest music ever written with a passion and enthusiasm that is second to none.

The band have also been active in raising funds for The ABC Trust, a charity founded by Jimmy Page’s wife to help under privileged children in Brazil, the involvement with the charity eventually led to a meeting with Led Zeppelin’s legendary guitarist Jimmy Page who has given the band his blessing and wished them all the best.