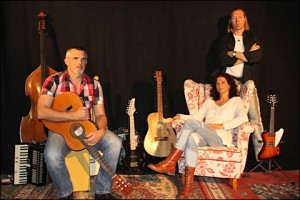 In september 2006, Michael and Leif met at a local demostudio. They started to talk about music and their influences. Leif had a tune which he started to play on the guitar and Michael felt that this was something he could relate to and the tune sounded just like his own ideas. In twenty minutes they had the idea on tape and they also tried to find some lyrics that was appropriate to the motion and feeling of the tune.

Yvonne Greiffe had poems which she had written long ago. She wrote the main part of them in according to things she had gone trough in life. Her lyrics is very personal and they fitted well to the song. 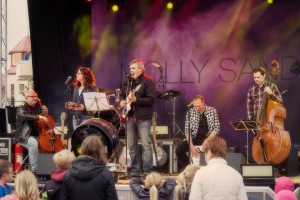 And that is still what they are doing – finding new ideas – turning them into songs – recording and having a lot of fun in the studio.

Leif Thörner and Michael Greiffe are the songwriters, arrangers and producers of two albums with Loveflowers. The first album “Loveflowers”, was relased in october 2008. It contains ten songs, and it is an unusual album, because there are five songs with swedish lyrics and five more songs with english lyrics. Bands do not usually mix texts in different languages ​​on the same album, so this is not so common.

The second album, “Bridge or Barrier” took a while to finish,

but in september 2013 the world was ready to meet Loveflowers development. Now was a major promotional campaign in europe and Scandinavia. It got many good reviews thanks to good promotional company and many newspapers wrote nice articles about the band and the music. The songs were also played on many radiostations throughout europe.

In august 2014, Loveflowers was invited to participate in “Texas Sounds International Country Music Awards” in Jefferson, Texas. The band performed and had a great time in Texas and a week later they got this amazing award “Best Songwriters of the Year”!!!