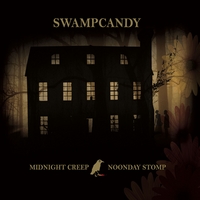 Swampcandy is a primitive blues influenced Americana duo. Ruben Dobbs’ aggressive finger-picking and rhythmic style (which often adds up to sounding like more than one guitar) combined with Joey Mitchell’s bass playing, pounding kick drum and percussive bass throttling (representing the presence of a full drum kit) easily fill up the sonic space normally created by a trio or even a four-piece group. Dobbs’ soulful, passionate vocals are the glue that holds it all together and makes this band tick.
Swampcandy was founded by Dobbs in 2007 and functioned with various lineups until he teamed up with Joey Mitchell in 2010 and the permanent die was cast. After only a few months together, the duo began to tour aggressively and have not slowed down since.  Whether its a 20-minute opening slot or a 3-hour headlining gig, they give the audience 110% when they perform, leaving the stage exhausted and crowd satisfied. 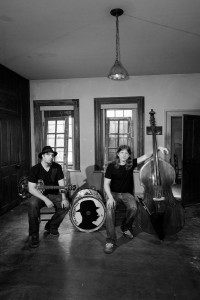 2014 was their most productive and rewarding year to date. Not only did they play a staggering 250+ shows at venues and festivals across the U.S. and U.K., they also won the 2014 Floydfest ‘On The Rise’ competition, coming in first place out of 37 bands competing at the festival. Their latest album, Midnight Creep/Noonday Stomp, placed in NBT Music Radio’s Top 150 Albums of 2014, and the track “1000 Miles” placed in the NBTMR Top 150 Singles category. They were awarded “Best Opening Act 2014” at the #1 venue in the world under 500 seats, Rams Head On Stage (Annapolis, MD), and received one of college radio’s bigger nods when they were given Radio Flag’s Radio Star Award  for “Best Artist Fall 2014.”   The  boys were also recognized as one of the top 20 bands to watch in the Mid Atlantic region by Blue Ridge Outdoors Magazine.
Dobbs is a volatile creative force while Mitchell is a pragmatic technician. They balance each other out like the two hemispheres of one brain. Growing up they both enjoyed and played the music of their respective generations and found a deep affection for the music of the past; Ruben with Delta Blues and Joey with Jazz and Classical. Dobbs has studied music on a need-to-know basis from an early age, becoming enamored with Classic Rock while still in grade school. Always careful not to destroy the sonic mystery music has represented to him, his curiosity led him down the family tree to rock’s roots in Mississippi Delta Blues and the greats who played it. Mitchell’s musical journey began upon hearing the opening bass line to Alice in Chains’ “Would.” The song inspired him to work it out on an old guitar he found in the attic, eventually leading him to pick up the bass at the relatively late age of 16. Focusing his attention on learning all he could to become the master of his craft, he has become a university schooled academician with degrees in performance and music education. Dobbs aural home-schooling has encompassed listening to thousands of hours of field recordings of early American music, developing a rare level of knowledge about the true roots of multiple genres. In distilling the essence of nearly undecipherable songs and incorporating that authenticity into his own compositions he’s writing new chapters in the history of roots music that inextricably link the past, present and future. Mitchell has spent thousands of hours studying complex music theory, composition and practicing the ins and outs of his double bass while reinventing the percussive aspects that can be delivered between his primary instrument and his kick drum. These juxtapositions are the key to their success. That’s why and how Swampcandy makes that dirty, sweet music that cuts straight to the bone.