The dual slide guitars of Delta Moon transport the listener to the heart of the American South, where sinuous Mississippi blues and the gritty backwoods twang of Appalachia twist around a solid backbeat like kudzu on a barbwire fence. The American Roots Music Association named Delta Moon’s Tom Gray 2008 Blues Songwriter of the Year. Tom’s songs have been recorded by Cyndi Lauper (including the hit “Money Changes Everything”), Manfred Mann, Carlene Carter, Bonnie Bramlett and many others. Tom first met Mark Johnson in an Atlanta music store, when he tried to sell Mark a Dobro out of the back of his van. The girl with Mark kept whispering, “Let’s get out of here.” Mark didn’t buy the guitar, but the two exchanged phone numbers and soon were playing together regularly in coffee shops and barbecue joints around Atlanta. Mark came up with the name Delta Moon after a pilgrimage to Muddy Waters’ cabin near Clarksdale, Mississippi. 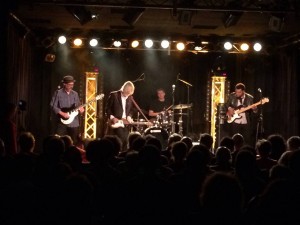 The band soon added bass and drums and started playing nightclubs and festivals around Atlanta and the South, quickly gathering a wall full of local “best” awards. After winning the International Blues Challenge in Memphis in 2003, Delta Moon widened its travels to include the US, Canada, and Europe. Tom was born in Washington D.C. and grew up in Virginia and Georgia, but home was always the family farm in the North Carolina mountains. In the 1980s he led a rock group, The Brains, that recorded two albums on Mercury Records. Originally a keyboard player, Tom picked up his first lap steel guitar in the late 1980s and hasn’t really put it down yet. Though not born in the South, Mark Johnson did grow up in a trailer park in Ravenna, Ohio. His uncle owned a record store, and there was always music in the Johnson home. Mark played guitar in bands all through high school. In the early 1990s he moved to Atlanta, where he formed a band called the Rude Northerners. About that time he abandoned standard tuning and became obsessed with bottleneck slide. Drummer Darren Stanley, originally from Stone Mountain, Georgia, and bassist Franher Joseph, from Haiti by way of New York City and Jonesboro, Georgia, both joined Delta Moon in 2007. The two have played together ever since they first met in the University of Georgia Redcoat Marching Band, when Darren played snare drum and Franher played Sousaphone. Delta Moon’s latest CD, Hellbound Train, is out now in Europe on the Blues Boulevard label and in the United States, Canada and Japan on Red Parlor Records.