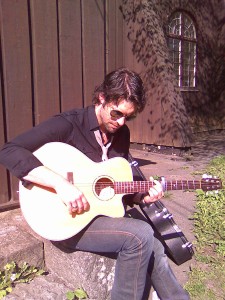 Simon says that the music has always been there in his head. It was there before he learned to play a musical instrument. Perhaps not surprisingly Simon grew up in a family where music had an important focus. His father played the accordion and entertained the local community at dances when Simon was young. His path to true musical discovery was born out of necessity. Simon’s father decided one day that he needed drum accompaniment for his performances and put the young Simon in front of a set of drums and taught him how to play. This would continue until the age of 14. It was then that he wrote his first song, a song he says that he simply had in his head. Most of us would probably consider this quite remarkable but Simon talks about it as if explaining how it was to tie his shoelaces for the first time. The transition from drums to guitar was still many years away. The subtle push towards musical expression continued when Simon’s older brother decided to start a band with Simon, Simon’s girlfriend and a couple of friends who not only knew nothing about music but had never actually seen one as Simon tells it. Still bitten by the music bug, Simon continued to play the drums and write music in his head, cranking out a total of three songs as the drummer. Simon’s evolution into a true singer/songwriter came when he was 21. It was then that he bought his a second-hand guitar, his first, and a how-to book on playing guitar. Not long afterwards Simon found himself at a birthday party as the vocalist with a friend who could actually play the guitar. Apparently the will was there but not the ability…yet. This birthday party would prove be the turning point in his singing career. At the party a local restaurant owner approached Simon and asked him if he would be interested in singing at her restaurant. He accepted the offer of course and a month after buying his first guitar Simon had his first gig…without knowing how to play. Simon sang accompanied by his guitar playing friend from the birthday party and their restaurant debut was a success. As the guitar player lived far away Simon was forced to learn to play in a hurry, learning so quickly and so well he played at the restaurant every other weekend for 3 years. Not a bad start for a guy who primarily played covers of pop rock and folk music. Along the way, he started writing and performing his own songs. Simon is now 37 and his music is a reflection of his journey through life and love. The collection of songs on this album is sincere and meaningful, sung in Simon’s distinctive soothing and smooth style. They reflect things that we can all relate to and Simon sings to you like a friend. From the pleasantly addictive “Can’t Let You Touch Me Now” to the pop flavored “Faultless” (with backing vocals of Irma Schultz Keller) to the hauntingly beautiful duet “I Will Change It All” with Frida Öhrn, these are tracks that take hold of you and don’t let go. All of the tracks on the album were recorded in natural sound…nothing digital about the music here. It was recorded live in order to capture the feeling and the atmosphere of the moment, that special feeling that only comes from a live performance. The album is produced by Glen Scott, whose credits include Eric Bibb, Ron Sexsmith, Stephen Simmonds and Sarah Dawn Finer. Simon has always known what he was born to do and that awareness has caught up with him. This is music for the heart and for the soul from a genuinely artistic musical soul. The appeal is contagious. Words Unspoken Simon Elvnäs på Södra Teatern