LAUGH AT THE FAKES (Canada) 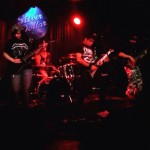 With a name as unique and identifiable as their sound, Toronto, ON’s LAUGH AT THE FAKES is a band that challenges the trends of today’s rock and metal scene. Since the bands inception in 2010, LATF has combined elements of metal, hard rock, and prog to create an unmistakable sound. Debuting their six song EP ‘One Night Only’ in 2011, they return in 2014 with their latest offering ‘Dethrone The Crown’ their first full length produced by Greg Dawson and mastered by Andy VanDette (Rush, Dream Theatre, Kid Rock, Deep Purple, Bruce Dickenson, Bif Naked). Due out on November 14th, the band is now streaming the first single ‘Killing Time’.

Their debut six-song EP ‘One Night Only’ was released in 2011 and their 2014 follow-up full-length album, Dethrone the Crown, is scheduled to drop this fall on November 14th. Produced by Greg Dawson and mastered by Andy VanDette (Rush, Dream Theatre, Kid Rock, Deep Purple, Bruce Dickenson, Bif Naked) is a “no filler riffs, just money riffs”, as vocalist / guitarist Mason puts it, “the record deals with today’s most newsworthy topics: War, guns, murder and corruption. It’s real, it’s raw and, of course, it’s honest.’

Touring across Canada, the Toronto-based group has built a solid following with music that’s geared to stand the test of time. Heavy, melodic, crushing and catchy – Laugh at the Fakes is all that and more.