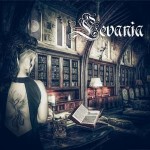 Out of Ferrara ( Italy ) comes a band Levania, formed in 2007 year. With actuelle one, they have released a few Demos/EP’s and two albums. As a band, Levania comphrises in its sound a classic goth elements, taken from so call. old school legacies, and that’s a platform for additional variants, borrowed from a  death, and rarely black metal options.

A powerful guitar riffs, and colorful keyboard passages defines a song forms, but a key elements in its approach stand in vivid female-male vocalizations, where angelic female voices are in constant ” fight” with darkest male/growl interpretations. In one hand, Levania seriously work on its songs and messages, but problems of evident mannerism also exist. They also in many realizing aspects knows to remind on well-known acts, but originality is also a important part of its approach.  Italians are also interesting in concert form, so, take a look on them…