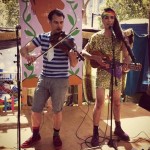 Filled out with accents of banjo, mandolin, piano , bass and percussion, The Sweet Trade’s new album “Pistols ans Parasols”, ferries you into a world of existential baladry, bouncy acoustic pop, and the occasional swoon-inducing instrumental. Like Beirut, Deotchka, or the Decemberists, but with fewer members, this duo offer up complex music with unconventional instrumentation that still manages to touch your heart and get stuck in your head. Often performing in costume and makeup, The Sweet Trade have played their songs in cabaret variety shows as part of sf Boylesque, in drag shows and poetry slams, and alongside such Bay Area darlings as kitten on the Keys, Jason Brock, Flip Cassidy, Vagabondage, and The Family Crest From Cafe Royale and Bazaar Cafe, to Infusion Lounge and Bubble Lounge, from Oakland’s burning man event, Sand by the Ton to San Francisco’s Castro Street Fair, The Sweet Trade enjoy performing their original music as well as the odd eighties cover, or sing-along pirate sea chantey…

The Sweet Trade’s debut full-length album, “Pistols and Parasols”, is on sale on ITunes, bandcamp, Amazon, and emusic, and features 11 original songs full of danger and decadence. With a batch of inventive homemade music videos in the works, and a West Coast tour planned, The Sweeet Trade is poised to take over the world!