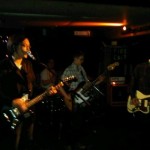 Smallgang started life in living rooms and days off work. Altough they still have living rooms and days off work the band has grown out of both to run rampant in bigger rooms of any given day of the week, which they take to be a good sign. Over the six years they’ ve been playing together, they’ ve been shouting over drums and tryin’ to come up with songs that they’ re happy to share with everyone else. This has thus in their album ” Trespass”, which is pretty musch a summnation of what they’ ve achieved in our time together so far.