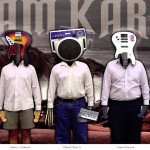 Mike Henderson & Chuck Oken Jr. have been playing music together for well over 30 years in Southern California, in their town of Claremont, on the outskirts of Los Angeles, in a land that comes before Coachella, Joshua Tree, and the Salton Sea. Thi is the opposite of Topanga, as this is Inside Land where the maps of the soul are draws in the suburbs, malls and bedrooms of our lives. This geographic region is The IE – The Inland Empire Henderson / Oken are two of the original members of the 25 year-old instrumental progressive rock group Djam Karet which has released 15 albums in their ongoing career.

Three live shows were performed and recorded in December of 2011 in front of appreciative audiences at various locations in The IE. Released by Fjam Karet’s new label “Firepool Records”, the music was spontaneous and improvised and recorded direct to 2-track digital. Six hours, worth of music was recorded, listened to, and lived with over time, and drawn down to this 65 + minute disc. Some effects ( reverb, delay, and WQ ) were added in the mastering process,but no overdubs or edits of any kind were used. The CD plays and sounds as it was experienced at the moment.

Henderson / Oken are multiinstrumentalists and strong players who have a very keen sense for mood, texture, and space and embrace all kinds of gear whether it is acoustic, analog, digital, or electronic. On “Dream Theory In the IE”, they play the following: