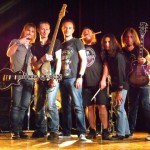 The band was first put together in year 2000, under the name Dead Poets, and during the first year they focused on covers of various hard rock bands. Soon enough, hwever, they felt the urge to write and play their own music. They started working on their first demo ” Some 1″, and changed the band name to Homerun. The name choice is both a tribute to the famous LP by Gothard , and a good description of the band sound, that in their ideas had to be tight, fast and tough as a homerun hit.

In 2007 they wrote and self-produced “Don’ t Stop”. Feeling confident is their brand new product, they finally met Frank Caruso, axeman from Arachines, and Stefano “Sebo” Xotta, who decided to beleive in the project and help the band. “Don’ t Stop”, then, was ready to hit the shelves on April 24, 2008 as their very first and official debut album. The album had a great reviews, on the best rock’ n’ heavy magazines and was choosen by Rock Hard Magazine for its own compilation. “Don’ t Stop” saw also a good public attention and in September 2008 it was released in japan and Asia by the prestigious label “Avalon/Marquee”. 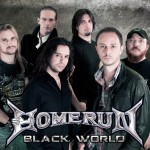 During 2009 Homerun found a new bassist in Paolo Luoni, new drummer in William Battiston, and then new guitarist in Valerio Castiglion. The new line-up was really close-knit from the first moment and throughout 2010 it worked hardly on the new album “Black World”, released i September 2011 by ” Tanzan Music”.