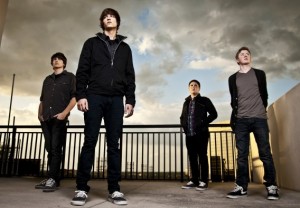 Some call it rock, some call it pop, but one things for sure, it’s infectious. Blending sounds of in your face classic rock guitar with modern edgy hooks and keys, the Florida 4 piece knows how to create music that hits right to the hearts with a live show that makes you wonder how you never heard of these guys.

The lyrics are heartfelt and honest while the melodies stick in your head like you’ ve know it your whole life. Formed a little over two years ago after years of friendship, the band has quickly found their sound touring around Florida with stops including the Florida Music Festival, opening slots with Sugar Ray, Orlando’s House of Blues with Allstar Weekend Hollywood Records, and Action Item, Backbooth with Before You Exit, and the Orlando Hard Rock Live. The group brings frontman Chris Ganoudis’s vocals and guitar with lead guitarist Adam Sliger bassist Dave Whitmore and drummer Nick Davila to the forefront of Florida’s alt rock scene. With their music featured on WJRR Orlando fans have been hearing a taste of what the band brings to the table 7 ML has also performed live on WTKS 104, 1 FM and has been played on WFXH Rock 106 Savannah. Despite only playing music a few years 7 ML sounds well seasoned both recorded and live The release of 2010 EP ” By The Light”, produced by Evan Coffman and Brock Berryhill (Alter Bridge/Versa Emerge/Rocket To The Moon) at Scarlight Studios, has earned them the respect of peers twice their age. 2010 brought the release of the first full CD produced again by Coffman and Berryhill, “Time To Decide” with the singles “Faster, Faster”, “Just Pretend & Disengage”, hitting radio on top of interviews in January’s Stitched Sound, February’s Axis Magazine, a feature on Alternative Addiction, countless blogs and Foxy’s Good Day Orlando.

Their music has been a constant top to download on Purevolume and Youtube including a spot on the film soundtrack for “real Men Wear Pink”. After spending the spring hitting up Florida including shows at UCF and opening for Minus the Bear at the 2011 Florida Music Festival. The summer bought dates with Ford Motors Drive With a Purpose campaign and headlining shows including the House Of Blues.