With their second album Kin Sonic, Jupiter and Okwess transcend the Congo’s 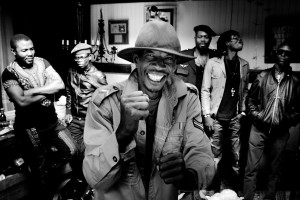 unexplored musical heritage and dive into a pool of modernity. We’re invited to savour his latest recipe, the Okwess (‘food’ in the Kibunda language) which is the fruit of all the encounters and influences he has absorbed during his many journeys around the world. It’s a recipe based on perfect alchemy, enriched by contributions from Damon Albarn of Blur and Gorillaz, violinist Warren Ellis of Nick Cave’s Bad Seeds and Robert del Naja, aka ‘3D’, of Massive Attack.

Del Naja’s input comes in the form of a unique and powerful album cover, the fee for which he decided to donate to an NGO called La Fondation Etoile du Congo de Madame Princesse Kibinda Mariam Rita[1], based in Lemba, the neighbourhood in Kinshasa where Jupiter lives. Rita, who is the daughter of a traditional chieftain, is very attached to her roots, and she’s given herself the mission to help homeless children who live on the streets, especially those of Lemba. Jupiter is the Foundation’s ambassador. 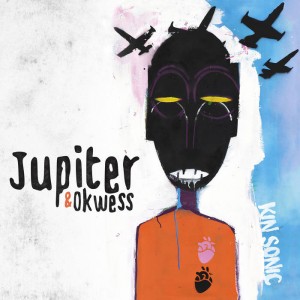 Jean-Pierre Bokondji, aka ‘Jupiter’ (the nickname has since become his official first name), was born in Kinshasa on the 16th December 1963, three years after the Congo was given its independence. He spent a large part of his childhood and adolescence living in Dar-es-Salam in Tanzania and East Berlin, where his father worked as an attaché at the Congolese embassy. But in 1979, at the age of 17, he left East Germany, returned to Kinshasa and threw himself into another dimension, the antithesis of the life he’d known until then.

Growing up in Germany, Jupiter listened to the best American soul: James Brown, The Jackson 5, The Temptations and Kool and the Gang. Then, back in the Congo, he discovered the ultra-dominant Congolese rumba style, but also a multitude of other rhythms and styles that vegetate in the shadows of rumba, all strangely reminiscent of funk, soul and rock. With the spark provided by this apparent complicity between Congolese traditions and Western music, Jupiter decided to create his own mode of musical expression.

He set about writing his first songs, 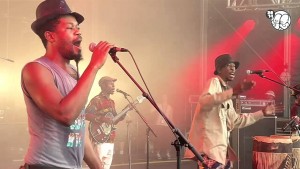 full of lyrics that question the accepted history of his country and the motives of the people who rule over it. It was a time when the Congo was teetering constantly between tyranny and anarchy. Barely 18 years old, he set his sights on a career in music, to the great disappointment of his father who was opposed to anything that might distract him from his studies. When the latter declared his intention to send his son back to Europe, Jupiter left the family home and began to live on the streets, sleeping in abandoned houses and earning a few coins as a tam-tam drum player at funerals. That’s how he earned the status of a grade one rebel, as well as his nickname, ‘Jupiter’, which has stuck to him ever since.

It was around this time, at the beginning of the 1980s, that he joined the band Famous Black, which later became Bongo Folk before finally settling on the name Okwess. Since then, Okwess has had many line-up changes but always kept the same captain at the helm.

In 2006, a documentary called Jupiter’s Dance directed by Florent de la Tullaye and Renaud Barret revealed this extraordinary personality to the world, this lanky wading bird dressed in a general’s uniform, a sort of ghetto Don Quixote who, in a dilapidated and abandoned environment, has fought stubbornly against the odds to keep his band alive, using all the arts of tenacity and débrouillardise[2].

In 2013, the release of the album Hotel ‘Univers’ gave Jupiter a certain international legitimacy as well as the opportunity to tour the world several times over. 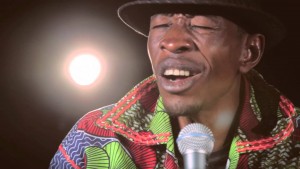 A few years ago, the French actress and film director Sandrine Bonnaire came to Kinshasa and met Jupiter. She was already a total fan. It felt logical to invite her to read an extract from the book Bandoki (‘The Sorcerers’) by Zamenga Batukezanga, an African philosopher and author with a vivid writing style who though little known outside the Congo, was a familiar face in the neighbourhood of Lemba, where he lived and died in 2000. Accompanying the song ‘Le Temps Passé’ (‘Time Passed’), which was written by Okwess’ drummer Montana during his hours of romance and nostalgia, the extract implores the ancestors for help with the arduous task of educating children in the harsh reality of Congo’s challenging environment. In some ways, by delivering this message, Sandrine took on the role of Princess Rita, helper of the children of Lemba. “When you’ve travelled down many roads, you inevitably make plenty of false steps. What’s important is to never give up.”

To never give up…in this country where life expectancy hovers around 50 years. Thanks to the Congo’s immense natural resources, half a century of independence dedicated to the enrichment of a small handful of people and the impoverishment of everyone else followed on from a colonial era in which the seizure of natural wealth was the only rule. Just like the writing of Zamenga Batukezanga, Jupiter’s lyrics focus on this painful past, and how to overcome it. It’s a discourse in which the truth advances prudently, on tiptoe, thanks in no small part to the dangers that lie in wait for those who talk too much. That’s why Jupiter uses stories and parables to denounce injustice in the song ‘Bengai Yo’, or to mock a ‘king’ who’s extravagant with other people’s money in the song ‘Benanga’. This kind of prudence could also be called ‘diplomacy’, a concept with which the Bokondji family are only too familiar. 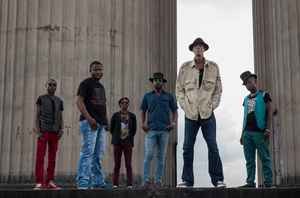 Gathered around Jupiter are the Okwess faithful: Montana (of Staff Benda Bilili) on drums and Yendé on bass, guitarists Eric and Richard and the singer Blaise.

Every song on Kin Sonic presents its own slice of life, its own bundle of thoughts and reflections, its own singularity. But also its own slice of universality, augmented by the violin of Warren Ellis and the keyboards of Damon Albarn.

Produced by Marc-Antoine Moreau (Amadou & Mariam, Songhoy Blues) and François Gouverneur, Kin Sonic finds its voice in the exploration of a heritage that has remained totally hidden until now, and comes to take its place in a contemporary landscape where walls and borders are exploding in the face of men’s yearning to share moments of beauty and pure madness, all mixed up together.