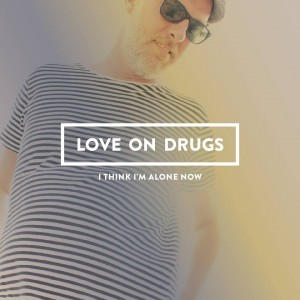 Behind the name Love On Drugs we find Thomas Pontén. He describes himself as an in Gothenburg residing singer songwriter and guitarist who for the past few years tries to combine the easiness of pop with the often more harsh and brooding storytelling of countrymusic, ”…with hope that others think I do it well”, he adds modestly.

Love On Drugs is essentialy a solo project. Pontén has written the songs, sings the lead vocals, as well as plays most of the instruments, alongside producing. He has however enriched the sound stage with the help of some gifted friends.

Krister Selander has been Love On Drugs bassplayer since day one and was therefore the obvious choice for the album. The frequently engaged drummer Johan Håkansson (Nina Persson, Mattias Hellberg, Kristoffer Åström, Ebbot Lundberg et al) plays on 3 tracks. Jessica Bah Rösman, also part of Thomas´s other band My Sweetest Punch, lent her voice for the title track and for “Queen Size Bed”.

“Watercolors” also features Andreas Johannesson, the lead singer of Pontén´s former band Little Green, who died in a tragic accident last year. The whole album is dedicated to his memory. “’Watercolors’ is actually a demo and the song was meant to be on Little Green´s 4th album. ’River Keep On Flowing’ was the first song we wrote together. It was also played on Andreas funeral”.

Pontén describes the 8 track and 25 minutes long album as a well balanced mix of catchy guitar pop and more low key country flavored songs. One can associate it with everything from the early guitar pop of The Church to songwriters like John Prine. Maybe even a tinge of Scottish ‘Postcard pop’. 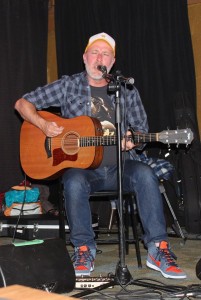 Lyrically it´s mostly about relations, new, ongoing and ended, skillfully narrated and described from many different perspectives. There is also subtle political statements as in ”Gated Conformity”.

Soundwise he´s gotten inspiration from all over, but the sound is, for being a debut album, very stripped from anything unnecessary. “I have always had a love for jingly jangly guitar pop, but have actually never played that kind of music until I started Love On Drugs. The circle have been closed”.