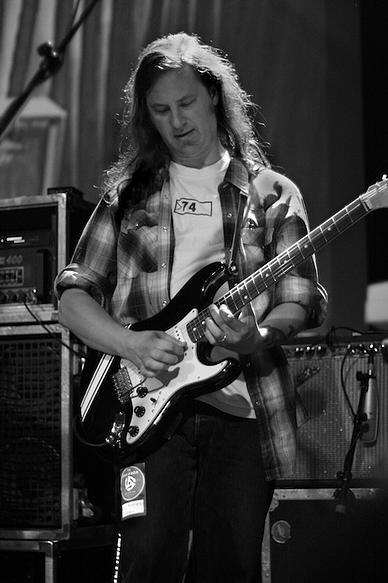 Born in Marseilles, France, grew up in Davis, California (with a year’s side trip to Tucson, AZ.), went to college at the University of California at Santa Cruz, studying with Gordon Mumma and Peter Elsea.​

In Santa Cruz he hooked up with Camper Van Beethoven, apparently for life. He moved up to San Francisco in 1989, moved to Los Angeles in 1997 to work for Dane Davis at Danetracks, a film sound post production facility, then back to Oakland in 2001, where received a Master’s Degree in Music Composition at Mills College, studying with Fred Frith, Pauline Oliveros, Alvin Curran, and Joelle Leandre.

While in Santa Cruz, he played with Camper Van Beethoven, Eugene Chadbourne and various other semi-musical projects, while in San Francisco with Sideways, Virginia Dare, Granfaloon Bus, Dieselhed and his own bands Hieronymus Firebrain which dissolved and reformed as Jack and Jill, which later led to various records of rock music under his own name.

While in Los Angeles, besides doing shows with Eugene Chadbourne, he played with Clyde Wrenn (as Clyde Wrenn and the Container), with Mike Marrt’s Beaumont, occaisonal shows with Mark Goodman’s group, Magnet, and spent a great deal of time touring the globe with Mark Linkous’ group, Sparklehorse.
Returning to the Bay Area in 2001, Jonathan was playing rock shows with his own eponymous band, as well as a reformed and revitalized Camper Van Beethoven. He has made several guitar-centric rock music CDs and has performed this music in scattered California shows, including opening slots for such acts as Built To Spill. (He has also sat in with Built To Spill and Yo La Tengo onstage as a violinist!)
Camper Van Beethoven recorded a new studio album, “New Roman Times”, in the fall of 2004, and a then put out a Greatest Hits package in 2009 (“Popular Songs of Great Enduring Strength and Beauty”), both followed by much touring in the United States and Europe, which continues to this day. A new CD of Camper Van Beethoven music arrived in early 2013, “La Costa Perdida”!
In addition to this, leaving Los Angeles and the film and music industries led Jonathan back to the world of improvisation and electronic music, and he has been performing improvised music for instruments and computer around the world for the past few years, including shows in the SF Bay Area, New York, Europe and Japan.

2003 saw the CD release of several improv collaborations with notable artists such as ​Fred Frith​ and Joelle Leandre, and with Shoko Hikage, and the first of many electronic music CDs. In 2004, after various shows as both a rock and an improvising duo with Dina Emerson, Chaos Butterfly formed and began recording and touring. Several CDs were produced worldwide, as well as performances in the US and Europe with many collaborators. Chaos Butterfly is now a moniker for Jonathan performing electronic or otherwise avant-garde improv with a host of other potential musicians.

In 2012 Jonathan relocated to Stockholm, Sweden with his family, where he currently resides.