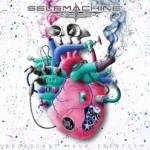 Selfmachine are newer Dutch act, with 11 songs debut album, entitled ” Broadcast Your Identity”. A group are consists of five members, and they have offered a modern authors views and same realizations on its debut. They combines elements of modern death metal with some other so call modern metal phrases, as same as hardcore/crossover tendencies as well. Growl and ” normal” vocalization change places in its material, also well produced, and in same manner performed. ” Broadcast Your Identity “comprises  equal materials and similar atmospheres between songs, with addition of ” fresh” and strong playing energy. Well done debut, worth listener’s attention, especially if you prefer newer ” agressive” tendencies under the genre.